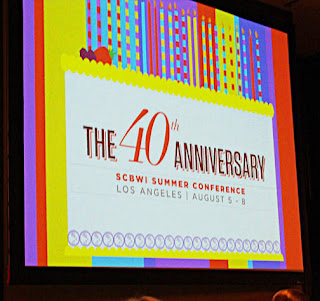 Last weekend I attended the 4 day SCBWI 40th Annual Summer Conference in beautiful Los Angeles, California. It was a great conference filled with good times with good friends. I met a lot of great people like the cute boy on the plane who told me all about how cool Popeye is, awesome illustrators and writers....oh, and the handsome fireman I briefly talked to in the lobby. I knew going in that I wasn't going to be crazy note-taking girl like I was last year, and I wouldn't be doing 4 mega blog posts, but rather sum it all up here in one post because I need to get to work applying what I learned. It wasn't so much about the talking points as it was about soaking up the inspiration of being at an event surrounded by over 1300 children's writers and illustrators. It was a record turnout with folks from around the globe.

It was so wonderful meeting up with so many online friends, and friends from conferences past.


I had a very helpful portfolio critique with Martha Rago, Executive Art Director, HarperCollins Children's Books. She pointed out which of my characters were working for her, and which were not. She also read through my first picture book dummy attempt in many years, and provided tips to improve my storytelling. I will need to take a writing course to better develop these skills.

On the last day of the conference, E.B. Lewis was kind enough to give me a portfolio critique, and he was so explicit about what many of my characters are missing, and pointed out which pieces had the quality he was looking for. This left my mind spinning as it was a complete 180 from what I was told in my critique last year. But, the more I digest his words the more I realize how right he is. He pointed me towards the works I have enjoyed creating most, where the process has been more a part of the work. His critique has had a profound effect on me. I haven't been able to think of much else since. It's like the blinders have been removed, and he has reminded me of my original intentions. For someone to look at your work, and say it could be better is a gift. It felt like Mr. E.B. Lewis looked inside my head, and knew what type of artist I want to be. For this, I thank him, dearly.

So my biggest take away from the conference is the status quo is not good enough. To take a line from Joss Whedon's Dr. Horrible, "...the status is not quo. The world is a mess, and I just need to rule it." Ok, well maybe not the whole world, but I, at least, need to rule my own art. We saw wonderful drawing and painting demonstrations from David Small, Jerry Pinkney, Denise Fleming, Kadir Nelson, Richard Jesse Watson, Marla Frazee, and Paul O. Zelinsky, which made me want to refocus on technique, and experiment with mark making and traditional painting again.

I have to admit, before the conference I was wondering why I was going to LA so soon again, but I walked away with the inspiration, focus, and direction that I was craving. Of course, knowing what to do, and applying it are two separate things. Now that the bar has been raised I've had a difficult weekend with my sketchbook. Paintings are due next month, and there are so many projects I want to do at the moment. But, a few drawings are starting to cooperate, and I feel the first pings of excitement of what they might turn out to be. Stay tuned.... this is still the beginning.

"You never know how what you do will ripple out into the world" -Bruce Coville
Posted by Angela Matteson at 10:00 PM

I'm tellin' ya, you should have talked to that firefighter longer! haha! It's wonderful that you're so inspired and focused.
I completely get the blinders thing.It's exhilarating and terrifying at the same time, isn't it?
And remember, don't be too hard on yourself even though you're rarin' to go. Get lost in the process and not worry so much about the product's outcome. *Hugs* I LOVE that picture of us at the top!

It sounds like you had a very inspiring experience. I felt that way after the two NY Winter conferences I went to. The portfolio critiques sound like they gave you lots of new insights. Now you just have to keep the momentum going, stay focused and don't forget what you learned!

Great post Angela! I'm so happy you had a great experience and I look forward to seeing what you do with all of the insight! I also agree with Diandra about the fireman ;) 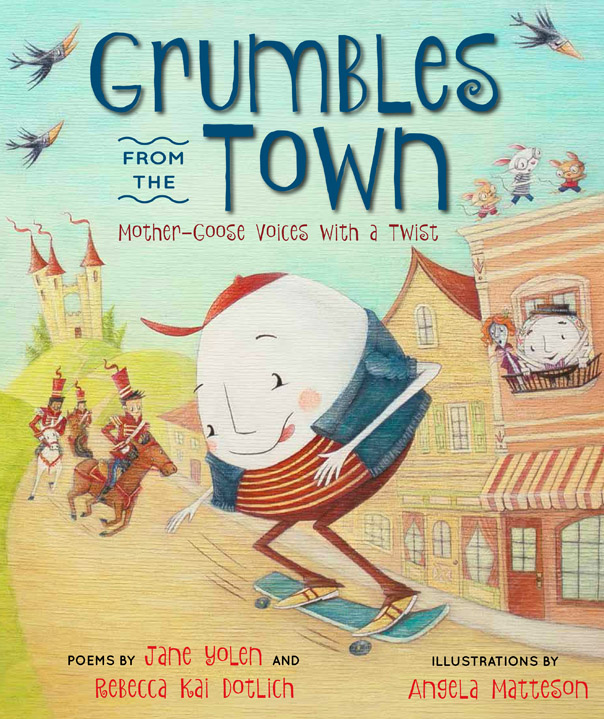 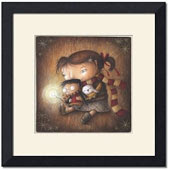